I’m excited to announce that I am currently in the mixing stages of a new full-length album estimated to be released sometime in mid-October of this year. The recording is a follow-up to last years “Trap Door” album, which was a collection of experimental, drone and rock songs originally recorded in 2005 at a house in Youngstown, Ohio.

The passage of ten years has certainly had its influence on my approach to songwriting, mixing and recording, though I think the general spirit of what I was doing back in ’05 remains intact with this new work. The inclusion of more electronic and synthesizer tones is probably the biggest contrast to the previous release, though I think I it is fair to say I am also paying more mind to melody and song structure as well. The album will feature a few surprise guest musicians and will be available for download on bandcamp.

In somewhat related news, I have a new incarnation of my seemingly ever-changing pedalboard (pictured below). This setup has really allowed me to get some crazy guitar tones that I don’t think I could have arrived at in any other way, many of which will be featured on this new release. Though one could easily imagine a more complex setup (I myself have been known to occasionally employ two similarly sized boards in the past), the current pedals bridge the gaps between versatility, portability and simplicity. 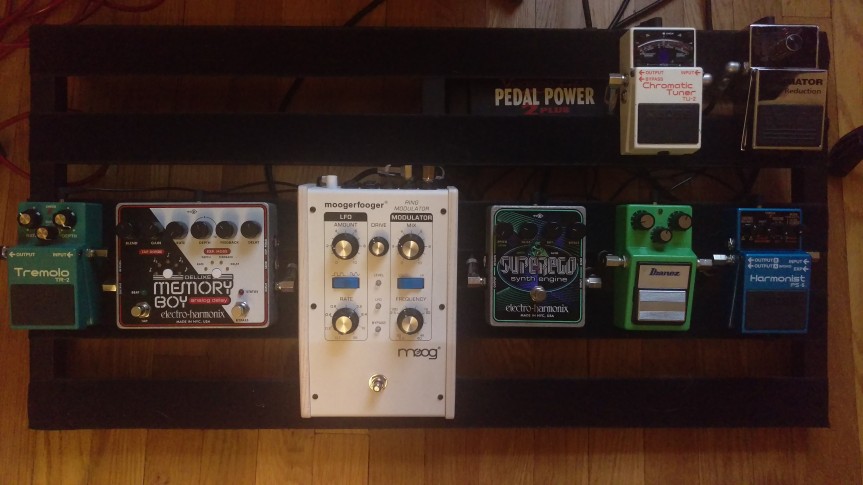 The current order is like this: guitar> Isp Decimator> boss TU-2 tuner> boss PS-6 harmonist> Ibanez TS9 tubescreamer> EHX Superego> Moog Ring Modulator> EHX delux Memory Boy> Boss TR-2 tremolo. The board is a pedaltrain PT-2 PRO and I am running a pedalpower 2 plus for the power supply. The heart of the board is definitely the Superego and the Ring Mod , both of which take the guitar more so into the realm of a synthesizer than anything else. With these tools I am able to lay down huge sounding and ever evolving drones, very reminiscent of Indian classical, Arabic, and Celtic traditional music. Here’s a sample recorded live with a zoom H2. Everything is coming out of the amp at the same time and there are no overdubs.